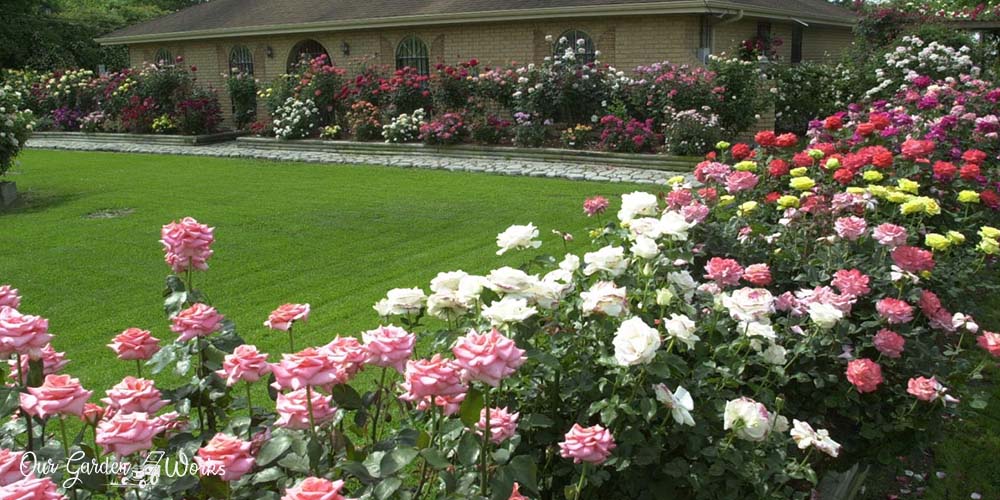 Knockout roses are a type of roses known for being the low maintenance type compared to other types of roses.

Though it’s dubbed as a self-cleaning flowering plant, many gardeners prefer the neat look and better blooms and opt to learn how to deadhead knockout roses.

In this post, we’ll discuss what’s deadheading and how it can help improve or speed up the bud formation of your knockout roses.

We’ll also share with you a guide and some helpful tips in deadheading these low-maintenance roses. But first, let’s understand the pruning process.

Deadheading is a form of pruning that is usually done to tidy up a plant and help them grow more blooms.

Instead of waiting for the dried petals of a spent flower to fall off, a gardener can do the job for the roses and expect more blooms by the end of the season.

Deadheading knockout roses is considered unnecessary by its founder since it can push out old flowers naturally.

However, some gardeners won’t be happy looking at their roses with a bunch of dead flowers hanging around. So they trim it for a tidier look.

Why Do You Need To Deadhead Knockout Roses?

Deadheading knockout roses is a matter of preference. Either you deadhead them or not, they will still bloom constantly throughout spring to autumn.

However, if you want to have neat-looking knockout roses on your porch then deadheading them is a good way to go. The pruning process also helps speed up the production of new and bigger blooms.

How To Deadhead Knockout Roses?

It’s easy to deadhead knockout roses. However, there are a few details that you shouldn’t miss in doing so like the potential spread of fungal diseases, prickly thorns that may hurt your fingers, and wounding the stem.

So, we’ve prepared a detailed process on how you can ensure that deadheading will do more good than harm.

Let’s first identify the gardening tools and materials that you will need for cutting off the spent flowers.

Using the right tools for tending to your garden ensures that your plants and knockout roses will be safe from tool-related bruises and making the right cut optimal for new growth.

Here are some of the important tools that you should have in deadheading your knockout roses:

1. Safety Gloves and a Long-Sleeved Shirt

Working your way through the thorny bushes of your knockout rose may end you up with a lot of cuts.

So wear a long-sleeve shirt and a pair of cotton garden gloves when you deadhead your knockout roses. You may also want to add a hat to protect your skin from the harsh sun.

Probably one of the gardener’s best friend, pruning shears are designed to cut stems and small branches. Always make sure to sharpen it before using it on your knockout roses. Dull pruning shears won’t cut the fibers thoroughly and may damage the stems.

If the stems are too thick or you’re planning to trim down your knockout roses, you may also use hedge clippers. This is only optional if you don’t have pruning shears at hand.

Plant fungi and diseases can be transmitted through the sap residue on your pruning shears. Plant fungi, molds, and other diseases are hard to control once they start to infect your roses and will require you to treat them.

So, to prevent the tedious process of applying fungicides on your roses, dip your pruning shears in a sanitized solution after every cut to keep the disease-causing bacteria away.

You can either use a diluted soap dish solution or alcohol since bacteria, fungi, and molds hate them.

Check out the following steps in deadheading knockout roses:

A. Deadheading a single Rose in one stem

Cut the stem below the first leaves near the rose, just above the nest layer of leaves.

The reason for this is that when you cut on top of the first leaves, new stems will grow on the shoot and will become congested enough to attract plant diseases.

B. Deadheading a spent Rose in a stem with multiple Roses:

Some stems grow multiple flowers with two to three roses in one stem. If one of those roses needs to be cut off, you should leave the healthy roses intact.

Cut where the shoot of the spent flower meets the stem that holds the other roses.

3. Dip your pruning shears after every cut to sanitize blades and remove the spa of previous plants that may contain plant diseases.

4. Expect new growth in the next couple of days and enjoy new blooms throughout the season.

You might be thinking, why should you bother deadheading your knockout roses if they can push the dead flowers away?

Well, there’s a couple of reasons it’s worth the effort. Here’s why:

Cutting knockout roses can be considered as somewhat strategic pruning. You anticipate how the new stem or bud will grow so cutting the wrong stem may mess up the look of your beautiful blooms.

So, here are some helpful tips in deadheading your knockout roses:

Tip 1: Always clean your pruning shears before and after use to avoid spreading fungal diseases to your plants.

Tip 2: Wipe your shears properly after use and oil them with WD-40 to prevent them from rusting. Do this with your other tools so they can last longer and you can save from buying new ones. If there are already some signs of rust in your pruning, shears, you can remove them with some helpful tips here.

Side Note: How to sharpen pruning shears?

Tip 5: Though they’re looking healthy, faded knockout roses can be deadheaded even if they don’t turn brown just yet.

Tip 6: You may opt not to deadhead your knockout roses and they will be just fine.

Tip 7: Inspect the flowers regularly and look for any signs of pest infestation and plant diseases so you can treat your knockout roses ahead of time.

Tip 8: You may also want to invest in a good fertilizer for knockout roses to boost their blooms. Healthy plants have low chances of attracting unwanted insects and developing plant disease, so fertilizing them is worth the shot.

With the multitude of information that you can have online, it’s easy to come across the different views on deadheading roses in general.

So here are some of the few misconceptions that you should be aware of especially if you just started growing knockout roses.

Misconception #1: Cutting on The Wrong Branch Can Kill Your Roses

The truth is, your knockout roses can still survive and grow back with new blooms and leaves. What you should be worried about is how they will grow back.

Sometimes cutting on the wrong location may encourage the growth of several roses in one stem that may attract plant diseases to thrive.

Misconception #2: You Have To Prune The Stem at a 45-Degree Angle:

Myth has been around for a while due to the belief that when you cut the stem, the sap will come off oozing through the opening.

However, if you’ve been growing roses for a while now, you’ll notice that that’s not the case at all.

Should I deadhead my knockout roses?

Yes, if you want to have tidier look for your knockout roses. However, you may also opt to let your knockout rose clean itself. Clearly, with or without a deadhead, they will continue to bloom throughout the growing season.

How do you keep knockout roses blooming?

You should keep an eye on faded blooms and dead branches and deadhead them. This will relieve the plant from exerting its energy to push away old blooms and focus on new bud formations.

Do Knockout Roses grow faster when you deadhead them?

Deadheading the old and faded blooms help speed up the bud formation of knockout roses. Since it’s self-cleaning, you’re just the job for your roses which makes them grow more blooms faster unlike when you allow it ‘clean‘ itself.

How long does it take for roses to bloom after deadheading?

Since you helped your knockout roses to get rid of the old blooms, it can proceed with bud formation and producing bigger blooms. Knockout roses will produce beautiful bloom after five to six weeks after you deadhead them.

What happens if you don’t deadhead roses?

If you don’t deadhead your knockout roses, there will be dead flowers laying on the stems until they fall off on their own. After it cleans itself from the old blooms, new buds will start to grow and produce more blooms.

The only difference when you deadhead them is they’ll look nicer and cleaner during the entire season. At the same time, you’ll be cutting off the cleaning task of the knockout so it can produce blooms sooner than later.

How long do knock-out roses live?

Knockout roses can live for two to three years. To prolong its life, you have to make sure you’re giving it the right nutrients from fertilizers, keeping it safe from unwanted pests, and prune and deadhead the faded flowers if deemed necessary.

Knockout roses are easy to grow and dependable for their constant blooms during the growing season.

Learning how to deadhead these versatile flowers will pay you off with more beautiful blooms throughout the season. Keeping it trimmed and free from faded flowers will also give your garden a more lively vibe.

How many blooms did you get when you tried to deadhead your knockout roses for the first time?

Let us know in the comments how you did it and inspire more gardeners to deadhead their roses too.

If you find this post helpful and informative, don’t forget to share this post with your friends and family and help them get more blooms during the growing season.

2 thoughts on “How To Deadhead Knockout Roses? & Why It’s Important?”