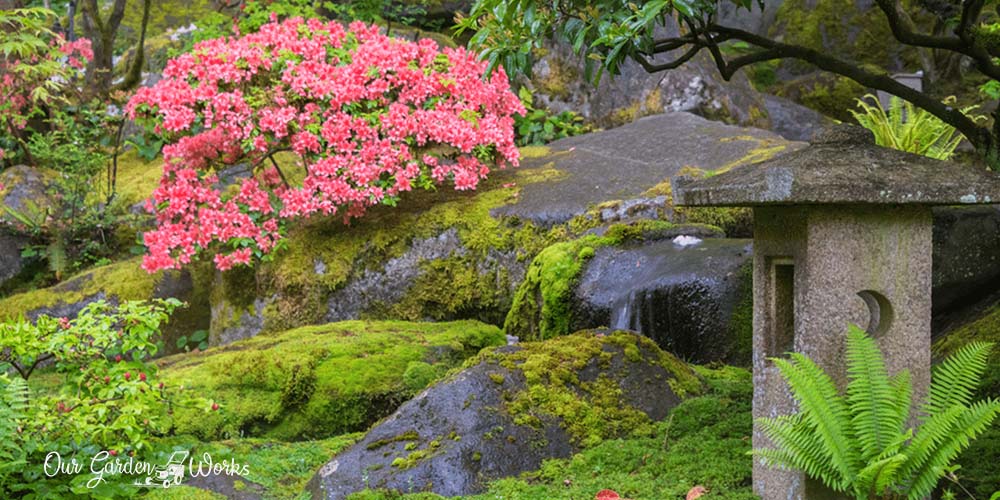 Moss is a tiny accent in nature that gives off an old but serene vibe in a garden. Growing moss on rocks has probably piqued your interest due to the rising popularity of terrariums and landscaping.

In this post, you will learn how to improve the vibe in your garden by adding moss on rocks.

As gardeners, we all know the essence of knowing more about a plant before adopting it in your care. Learn more about moss and see its potential in reinventing your garden this year.

The Teeny Tiny Tough Plant: What is Moss?

Moss is an ancient spore-bearing plant that has been on Earth for millions of years. It doesn’t have roots like other plants but uses rhizoids to absorb nutrients from its source. Like mushrooms, moss thrives in shade and wet areas away from the scorching sun.

Despite its size, moss can handle foot traffic and withstand extreme weather conditions. If you’ve been gardening for a while now, you might have heard or used peat moss or sphagnum peat moss. Peat moss helps keep water in the soil, available for the roots of the plants to absorb.

Other moss species are used in landscapes due to their ability to create an aged look in the garden. They replicate the ambiance found in rainforests, waterfalls, and rivers. Two classifications of moss are acrocarpous and pleurocarpous.

The two types of moss have physical and growth differences. They are almost the same when it comes to their spread.

Before you decide on growing moss on rocks, it’s best to check which ones you’re going to use.

Acrocarpous or clumpy moss is a moss species that prefers to stay low. They have no branches but instead form a colony with a round shape that looks like a small conifer tree.

Though moss thrives in moisture, acrocarpous, in particular, loves a dry habitat. Its sporophyte is at the end of the stem, protruding vertically.

Pleurocarpous or carpeting moss has branches and spreads out horizontally. Unlike acrocarpous, it thrives in moist and wet conditions.

Pleurocarpous moss grows fast and can cover a patch of soil or stones within 6 to 7 months. Due to its spread capability and growth rate, most gardeners consider it ideal for moss propagation on rocks.

To promote the growth of moss in your garden and your landscape rocks, here are some of the environmental conditions that you must consider:

(1) Acidic soil, alkaline, or neutral soil: Moss thriving in acidic soil is a common misconception for some gardeners. Moss is highly adaptive when it comes to its environment. It can grow in any soil which is why it is an ideal alternative to grass.

(2) Moist environment: Moisture is crucial to moss growth in your garden. Place the rocks near a french trench, low-lying areas, or areas with puddles to encourage moss growth. For aesthetics and design, gardeners intentionally place the moss near man-made lakes and fountains.

(3) Flood-prone area: If your lawn is prone to floods, you’ll have better luck achieving a greener lawn with moss than grass. Moss absorbs moisture well and helps hold the soil to prevent mushy and muddy areas from developing.

(4) No other plants or grass: Though moss has no roots, it still gets nutrients from the soil or rocks that they grow into. It can’t compete with water and nutrients in the soil with plants, grass, or weeds around.

(5) Shady and no sunlight:  To grow moss successfully, you must place the rocks on a shady part of the garden. Having trees around would be a perfect spot for moss. In turn, moss under trees can serve as ground cover and moisture retainer to indirectly water the trees.

Benefits of Growing Moss on Rocks in Your Garden

Aside from its aged vibe, growing moss on rocks and soil in your garden provides many benefits, such as:

Unlike grass that needs constant tending, you only have to care for moss once, and it will grow and spread like wildfire in your garden. Moss may occasionally need some watering during hot seasons, but that’s all they need.

Pleasing to the eye

The stem and green growth from moss provide a steady source of greenery all season. You will never lose sight of refreshing greens in your garden regardless of the season except for winter.

Moss can serve as a good ground cover for the bare patches of soil rocks. It promotes the revitalization of the soil by holding moisture that benefits the local ecosystem.

It can be small, but moss can withstand foot traffic whether you put them on your flagstones or stepping stones. Its effect on the landscape can make you feel like walking around cushiony grass.

Having moss around is ideal if you live in an area where chemicals have been used, like a revitalized mining area. Moss can absorb all the toxins in the soil and make it workable for plants again.

Moss holds so much moisture that can prevent the negative effects of floods and heavy rains in your garden.

Due to moisture retention, moss can prevent your soil from eroding and moving from one place to another.

In the cold spring breeze and mellow fall, growing moss on rocks and lawn ensures that you’ll have enough green around your yard.

Not so much right? Well, you can do that with the mini plants – moss. There are two unique ways to do it.

These methods are as follows:

#1 Growing Moss By Patching It Up

If you plan to start on the ground, you may do so by transplanting a patch of moss. If you see it growing abundantly in some parts of your property, you may transfer them on the ground like the process of sodding. If you don’t have any live moss in your garden, you may purchase them from moss growers online like Moss Acres.

Note: Do not buy dried moss since they are purely for decoration purposes only and not for propagation. Some gardeners may argue that they are alive, but they’re already processed with chemicals and dyes. Preserved moss is processed with glycerol to keep them looking alive, but they will no longer come back to life.

Steps in patching live moss on the ground

Check out the materials you’ll need to patch up the moss sheet or clumps:

#2 Growing Moss With a Slurry

Now, for the fun part of growing moss on rocks, you’ll be making a moss milkshake. The live moss will be mixed with either yogurt, milk, or buttermilk. Dairy products help replicate the ideal environment for moss and lower the pH level on the surface of the rocks.

Prepare the following materials for this method:

As moss has become a highlight in recent years, here are some fun facts about them. Who knows, you might fall in love with their bushy and cushiony aesthetic.

Moss is tougher and stronger than it looks. It can survive extreme temperatures ranging from -521ºF to 212ºF and has been existing for 450 million years. If plants go dormant in winter to withstand extreme cold by dying back, moss becomes dormant by drying up to withstand extreme heat.

Fun Fact #2: Moss is a best friend to plants and trees

Moss is like sponges that soak up water and moisture and hold it long enough until the next rainfall or watering schedule. Their ability to retain water helps trees and plants access moisture for several days.

Moss also serves as a ground cover and has a mulching effect that helps keep the soil temperature low during the hottest time of the day.

They are the first ones that invade and colonize an area and make it suitable for plants and trees to grow. Even if the area is contaminated with chemicals.

If you think glowing floor plants can only be found in movies and games, some kinds of moss make it into reality.

A moss species called Schistostega pennata or dragon’s gold is a type of moss that has adapted to low-light and grows in caves. Due to the lack of enough sunlight, it creates a luminescence. It has a thread-like structure that gathers light-bearing bodies that cause light.

The dragon’s gold species of moss are found only in China, Japan, Siberia, Europe, and North America. They are rare and one of the toughest species that can survive without light.

Growing moss on rocks is easy even for novice gardeners. Moss has been a common sight for most of us.

Who would have thought that their small species are doing an essential task in our ecosystem? The world indeed is full of wonders.

We hope that this post helped moss grow in you (not literally haha). With the right arrangement and landscape design, moss can transform your garden into a zen space for you to relax at home after a long day at work. Growing your terrariums can also spark some joy in you.

Let us know in the comments about your opinion about moss. Please spread the noble work of moss to your friends and let us give this humble plant the spotlight it deserves.