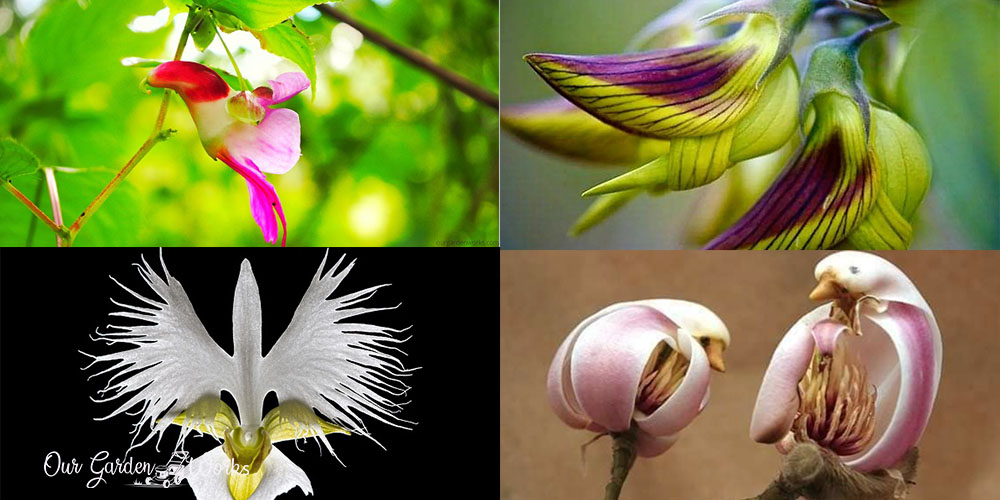 Having rare plant species in your garden is one thing but scoring flowers that look like birds is another green thumb level.

The amazing form and color combination of these plants will pique your imagination and see their resemblance to the most magnificent birds like parrots, doves, and hummingbirds.

In this post, we will showcase the beauty of nature and its attempts to mimic wildlife. We will also share the types and habitats of flowers that look like birds so you can collect and grow them at home.

The sound of birds in the morning adds up a relaxing ambiance to a home. Aside from their naturistic tunes, their presence makes your garden feel more of a paradise.

In the absence of these birds, let the following plants replace their presence until they come again:

Whether it’s like a moth or a bird, the lateral petals of the moth orchid make it more than just a flower.

Moth orchid is a nickname for phalaenopsis orchid which is a native plant found in Southeast Asia and Australia.

The feathery petals of a moth orchid and its beak-like feature close to its nectar make it popular among plant collectors.

Other than how it looks, some say that a naturalist saw it from afar thinking it was a group of moths. However, there’s a deeper meaning behind its name: moss orchid.

The word Phalaenopsis is derived from the Latin word phal which means moss. It is the name given by Carl Ludwig Blume who gave it its name.

Moth orchids have thick roots and short stems and develop broad leaves. They don’t need soil and have some hair-like roots that develop on the surface of their medium which helps collect moisture and nutrients in the air.

The parrot flower is probably the most bird-looking plant on our list where it takes up the shape and color combinations of a parrot.

It is a very rare plant species that grows in the wild in north Thailand (Chiang Mai), Burma, and in the state of Manipur in northeast India.

The beautiful parrot flower was first described by botanist Joseph Dalton Hooker as a flying cockatoo before it was compared to a parrot.  Its blooms often have shades of red to purple, a hooded dorsal, and lateral petals that look like wings.

Parrot flower, parrot balsam, or Impatiens psittacina is discovered by a British official Arthur Hedding Hildebrand in the shan states in Burma.

He brought it to England but the seeds didn’t grow well due to climate differences. Today, it is a protected plant in Thailand and is banned from being exported out of the country.

Opposite its alluring flowers, the plant itself is bushy and can grow up to 6 feet tall. It is said that every year, you have to wait for 10 months before you can see the flowers bloom, which is around October or November.

Since the parrot flower is a protected plant, it is not available for growing outside Thailand. However, counterfeit parrot flower seeds are rampant across the globe, which is far from the real parrot flower plant.

Despite its mysterious occurrence and protected status, here’s some information about why it will not survive in other parts of the world:

Both the parrot-like blooms and the special growing needs of parrot flowers make it one of the rare gems of nature.

Sadly, you can’t have them at home. However, you may visit them during their blooming season in Thailand.

Dove orchid is a type of orchid known as the Holy Ghost orchid, dove orchid, or flower of the Holy Spirit, or flor del Espiritu Santo.

Unlike other flowers, its dove-like feature can be found inside the blooms. It captures the hearts of most plant lovers due to its elegant-looking petals and unique presence.

Dove orchid grows in Central America to southern parts of America like Venezuela, Panamá, and Ecuador. It is most abundant in the humid and muggy mountains of Panama. It is an epiphyte which means it grows in the trunks of trees elevated from the ground.

Usually, flowers of dove orchids emerge in late summer and early fall, giving you a stem stretching forward with a dozen of flowers.

Sadly, the dove orchid is now in danger of extinction due to illegal trafficking that takes it away from its original habitat.

Due to its undeniable beauty, the dove orchid became Panama’s national flower in 1936. It is now grown across the globe where its growing needs can be sustained. Its growing needs, however, are unique which makes it hard for beginners to grow.

Duck orchids or Caleana major display an animated imitation of a duck with its wings open. It is a native orchid found in Australian forests and displays nature’s way of mimicking a small duckling.

The flowers are small which are about 1 to 2 inches so they are often mistaken by insects as members of their colony.

Duck orchids are pollinated by insects in a very peculiar way. Male sawflies mistake them for female sawflies and in an attempt to interact with the flowers they mistakenly take the pollens and spread them onto other flowers. The said pollination process is called pseudocopulation.

Due to the unique form of duck orchids, they became the highlight of Australian stamps in 1986.

If you want to see them in person, then you’ll have to book a flight to the Land Down Under.

Now onto something that you can grow at home, green birdflower or regal bird flower is a plant that will surely make you look twice if it’s a bird or a plant.

Crotalaria cunninghamii, popularly known as the green birdflower, is a perennial shrub that grows in arid conditions on deserts and coastlines of Australia.

The blooms of the green bird flower have a sepal that looks like the beak of a bird attached to the hairy stem. The petals are remarkably traced with black linings that resemble the edges of feathers in a bird’s wing. It contains clubbed seed pods where the seeds rattle.

Unlike other flowers that look like birds in this list, the green bird flower not only serves unique looks but also has economic and medicinal benefits.

Many gardeners use it as an ornament at home but the aborigines use its fiber in making fishing nets, sandals, and canvas. It is also known for being an antidote for eye infections.

Euphorbia tithymaloides, commonly known as redbird flower, is a perennial succulent that resembles a flock of red birds congregating in one spot.

Several flowers in one stem make it look like birds feeding on a tray. It is a native plant in tropical and subtropical parts of the US and has been named several nicknames in every region:

The whole redbird flower plant can reach up to 6 to 8 feet. Its stem is often leafless which makes the red flowers more pronounced. When the stems are scarred, they excrete a milky latex that can irritate the skin or eyes when touched.

Despite its beautiful display of red bird-like flowers, the roots, stem, and leaves of redbird flowers are toxic to humans and pets.

So, if you’re planning to have them at home you must place them in areas where no pet or kid can access them.

Nothing is more majestic in the field of flowers that look like birds than the white egret orchid. It is a terrestrial orchid native to Russia and Asian countries such as Japan, Korea, and China.

It grows from tubers planted in shady areas, wetlands, and bogs. It is also known as the fringed orchid or sagiso which is now the official flower of Setagaya ward, Tokyo.

The white egret orchid possesses eye-catching flowers that display like a white egret in flight. The flowers are around 1 to 2 inches wide and only develop one bloom per stem. Many plant lovers grow them indoors in grow tents and proudly add them as part of their collection.

Yulan magnolias or lily trees provide both an optical illusion that makes their flowers look like birds and a symbol of purity.

As a native shrub in China, they are among the oldest trees in the world that have been cultivated by Buddhist monks in temples since the 1600s. Due to its beautiful display of cup-shaped blooms, it is planted in the palace of the emperor.

The flowers of the Yulan magnolia tree start to look like a bird as the petals start to open during spring.

The deciduous tree can produce a ton of blooms in naked or leafless stems that may seem like several birds have landed on its stems. The birds-form of the flowers will be changed once the flowers become in full bloom and turn into cup-shaped flowers.

With its generous display of flowers, Yulan magnolias make a good specimen tree in cottage gardens and courtyards.

It’s amazing how nature plays with our eyes through the flowers that look like plants.

Though most of them are already regulated and in danger of extinction, their unique contribution to the beauty of our world’s flora is incomparable. Just seeing one will surely melt a plant lover’s heart regardless if he/she can grow it at home.

We hope that this post piqued your interest in discovering unique types of plants and make you realize that there is more beyond the plants that we’ve accustomed to. Let us know in the comments which flowers that look like birds caught your attention.

Have you seen the parrot flower or the duck orchid? If yes, then you’re one lucky green thumb!

Also, don’t forget to share this post with your plant lover friends and your kids and let them be amazed by the wonders of Mother nature.