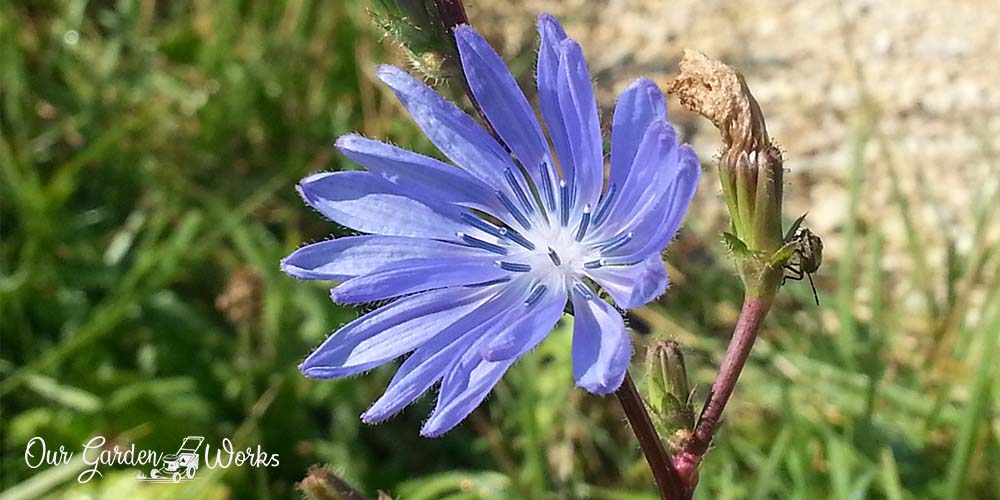 Growing your own food will ensure that you have access to fresh vegetables all year round. Furthermore, you will also be assured that no harmful chemicals were used in growing them.

Are you looking to add more variety to the salad greens in your garden?

If you are, then why not grow chicory?

It may be an acquired taste but this power food will definitely be a great addition to your garden.

Plus, it is quite easy to grow. So, do you want to know how to grow chicory? Just read on below and you will be harvesting your homegrown chicory in no time.

Common chicory or Cichorium intybus is a hardy perennial plant that originated from Asia, Europe, and North Africa.

It is part of the dandelion family of flowering plants. It usually has blue flowers as seen in the picture above but can also produce white or pink colored ones. This plant was brought to the United States during the Napoleonic Era back in the late 1700s.

Chicory is grown not only for human consumption but for livestock, as well. It was usually used as an additive to coffee or even as a substitute during the American Civil War. Now, this plant can be seen all around the United States.

You must also have heard of endive right?

Did you know that the British call chicory by a different name?

However, they are two distinctly different chicory varieties.

Americans call the Witloof chicory or Belgian endives as Endive. Meanwhile, the British call the curly endive as chicory. You should also remember that leaf chicory is usually called an Endive.

However, a true endive or Cichorium endivia is a whole different species from the same family.

Today, there are two types of chicory that you can choose to grow. These are root and forage type chicory.

Each has its own culinary use and health benefits. Its different varieties will be explained more below.

What Chicory Varieties Can You Grow?

There are plenty of chicory varieties that you can grow in both your garden and in planters. They are mainly categorized into two types.

Root chicory or Cichorium intybus under the cultivated plant species have long been used as a coffee additive or substitute.

This has long been practiced by the Europeans and especially in places where it is native, like in the Mediterranean, parts of Southeast Asia, India, and South Africa.

In the US, this practice is more commonly done in New Orleans, ever since the great depression. What they usually do is to roast or bake the chicory roots and grind them to a powder-like consistency.

After that, the powder is mixed together with coffee and then brewed together. When you bake or roast chicory, it produces a taste that comes close to coffee with nutty or woody undertones. This is why they are an effective additive or substitute.

Although Chicory is a perennial plant, did you know that it can also be considered a biennial?

Since its root can become very bitter after two years, it should be lifted and then dried in its second year.

This is the reason that although this plant is a hardy perennial, it is treated as a biennial or plant whose life only spans for over two years.

Chicory root has plenty of nutrients that are good for your body. It contains Vitamin C, Vitamin B6, Manganese, and Potassium.

It is a good source of inulin which improves gut health.

Chicory can also be grown for its leaves. When you harvest chicory from the wild. The older leaves can be quite bitter. However, there are recipes that make use of its bitterness like in some Italian and Greek cuisines.

This perennial can also be cultivated and its leaves are mixed into salads, with the leaves served raw or blanched.

There are typically three chicory forage chicory varieties that you can easily plant in your garden. In addition to Belgian Endive, you can also choose Catalogna Chicory or Radicchio.

Shaped like cylindrical lettuce, the Belgian endive or Witloof is the easiest variety to grow. It can be forced to produce tender, tasty, and white leaves for cooking.

Though chicories are famous for being bitter, the Belgian endive has extremely mellow bitterness. Its leaves are tender and crisp with quite a refreshing and clean aftertaste. There are three common varieties you can choose from, these are Flash, Daliva, and Zoom.

Belgian endive can also be considered a root chicory type since its roots can be used as a coffee additive or substitute.

The variety that is usually cultivated is the (Cichorium intybus var. foliosum) Catalogna Chicory or more known as Puntarelle. It looks like a cluster of small sprouts that is being protected by longer and sharper leaves which are quite similar to dandelion leaves with light green stems.

This type of chicory is usually harvested when it is still young and tender. Its leaves have a refreshingly bitter taste. Additionally, Puntarelle can both be eaten raw or cooked.

The second variety you can easily grow in your garden is radicchio, also called Italian chicory. It is characterized by its white mid-rib and deep reddish-purple leaves. This variety is often mistaken for red lettuce or cabbage.

However, unlike the lettuce and cabbage, the radicchio has a slightly more bitter or spicier taste which becomes sharper when cooked. If you want to reduce its bitterness, you can soak it in water for a few minutes.

There are several varieties of radicchio you can choose from.

1. Chiogga: This radicchio has a strong bitter taste with rounded leaves. It is also the type that you can easily find in the market. This variety can be harvested after 67 days.

2. Treviso: The second radicchio variety you can grow at home is the Treviso. It has longer leaves with the signature reddish-purple color. It has a slightly bitter flavor but is comparably sweeter than Chiogga. It is mainly used to add color to salads.

3. Treviso Tardivo: Unlike the usual Treviso, this variety is characterized by its narrower reddish-purple leaves and thinner mid-rib. It also has the mildest flavor out of all the radicchio types.

4. Castelfranco: Unlike the typical radicchio, the Castelfranco has predominantly yellowish cream-colored leaves with scattered red speckles. The Castelfranco has tender leaves that are shaped like lettuce and unfold like a beautiful rose. It can taste from mildly sweet to bitter.

How to Grow Chicory?

When you grow chicory, you will find that it generally follows the same steps as when you are growing other leafy vegetables like lettuce or cabbage.

Materials That You Will Need

A Step-by-Step Guide To Grow Chicory

Like most plants, there are two ways you can grow chicory. It’s either you start with seeds or transplant them. Here is how you do it.

How To Harvest Chicory?

Your chicory leaves will reach 12 to 18 inches in length in about 85 weeks. However, if you have planted forcing types like the Whitloof, you can harvest the Chicons (chicory bud) in about a month or so when they are about six inches tall.

When harvesting them, loosen the soil around the plant but make sure not to touch the roots. After that, slowly pull it out. For varieties like the Witloof, cut off the Chicons but make sure to leave about an inch of the bud.

Your chicory roots will stay fresh for a few weeks when stored in the fridge or shed where it is protected from frost.

2 Things You Need to Know When Growing Chicory

Here quick tips and things you should know when growing chicory.

You might have read the word forcing or forcing variety a few times in this article. What it means is basically pushing or forcing the plant to grow outside of its normal season, which can either be a shorter or longer growing period.

Furthermore, there are chicory varieties that are usually forced to grow like Witloof. Forcing is done on this plant by keeping the temperature of the soil warm (approximately 15 degrees Celsius while keeping the soil moist but not too wet.

Chicory might not be susceptible to pests but it is still better to prevent a pest infestation from happening. Usually, snails and slugs are quite attracted to chicory seedlings. To stop that from happening, place eggshells or sawdust around your seedlings to stop them from coming closer.

It is also prone to rotting and fungal infections such as fungal root rots and Anthracnose. This fungal disease can be identified when dark gray spots can be seen on your leaves. When more of these appear, the leaf will die.

In more severe cases, cracks or lesions will start to show on the stems of the chicory leaf and will cause the center of the plant to dry up. To stop this from happening make sure the leaves don’t touch the soil.

Additionally, introduce movement by rotating the crop’s placement every two to three years.

It does not take a lot of effort when you grow chicory. Because it is a hardy perennial, it can survive in most temperatures and even in heavier types of soil.

Just make sure that it gets the sun and water it needs, and you will successfully grow chicory in your garden.