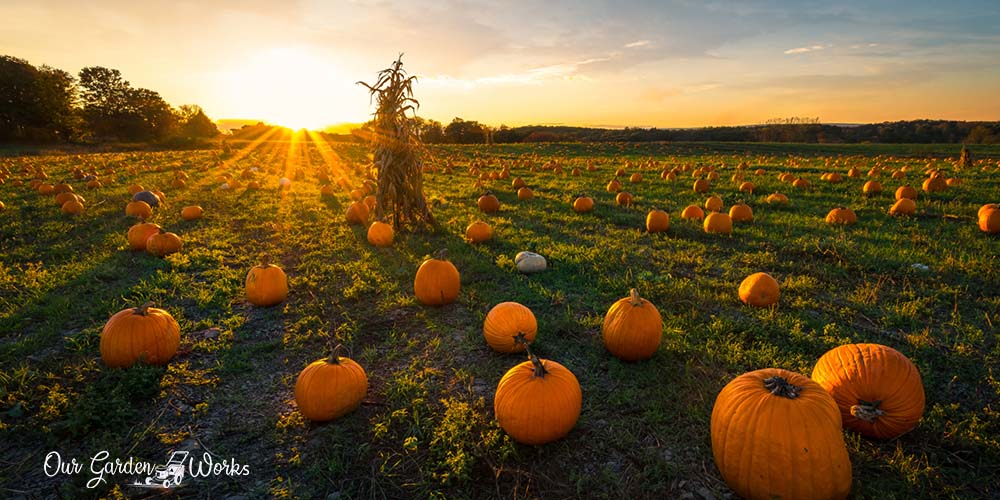 Pumpkins are quite a challenge to grow because of their demanding growing requirements. When you try to grow them at home, one of the usual things you might ask is: do pumpkins need full sun? Sure, they need sun exposure, but how much is too much?

Find out how sunlight affects the development of pumpkin plants and what to do when pumpkins get too much sun. Their skin may look tough because the whole plant knows how to protect itself during the growing period. Learn more about these giant orange fruits and find delight in how they grow from a single seed into a big Jack O-lantern.

Yes! Absolutely!. Pumpkins and other plants under the Cucurbits or gourd family require full-sun exposure during their growing stages. To withstand the scorching sun, they need a lot of water. It is why they are known as the thirstiest type of plants.

Pumpkin farms nestle in areas where the pumpkins can spread their vines across the field and bask in the sun for 6 to 8 hours.

Sunlight is a crucial energy source during photosynthesis in plants. However, its role in pumpkin development goes beyond that process.

The Role of The Sun in Pumpkin Growth and Development

The light and warmth of sunlight are a non-negotiable need for pumpkins. Here’s why:

Sunlight is crucial in photosynthetic processes

The leaves of pumpkin plants absorb light energy from the sun. They use it to convert water and carbon dioxide into glucose.

Like humans, plants use glucose as an energy source to perform other plant processes. These include growing new leaves and stems and producing starch and cellulose.

Heat from the sun keeps the leaves dry

Wet foliage attracts both pests and spores of fungal diseases. Pumpkins need a lot of water, and without the heat of the sun, the fruit, vines, and leaves may rot in the ground due to excess moisture in the soil.

The pumpkin plant is also at risk for developing diseases such as:

Long exposure of pumpkin plants to the sun allows for more production of starch and glucose. With more energy and starch, the plant will continuously work on developing bigger pumpkin fruits.

For that reason, most gardeners plant pumpkin seeds as early as May or June to give the plants ample time to grow flowers, pollinate, and develop the fruits.

You’ve probably heard some gardeners say that exposing green pumpkins to the sun will change their color. That is true because a biochemical process happens inside the pumpkin fruit during the ripening process.

The last stages of pumpkin growth are during fall, wherein nights are longer and the days are shorter. When the pumpkin plants notice this change in season, they stop producing chlorophyll which makes the pumpkin green.

Simultaneously, the sunlight will emit a spectrum of colors from red to blue that will trigger the exposure of beta-carotene in pumpkins, causing them to change into orange or yellow.

Can Pumpkins Get Too Much Sun?

No. Pumpkins need everything the sun can give, even when it becomes hot during summer. The pumpkin leaves may experience sunburn if the plant is underwater.

During a dry spell or scorching summer, don’t forget to water the pumpkins twice a week to keep them hydrated. The leaves need more moisture to maintain their vigor and endure the hot sun.

One of the best practices is to keep the foliage as long as you can. They are the ones that protect the fruits from sunburn or sunscald. When the pumpkin fruits turn orange, they develop natural protection against the harsh sun like sunscreen.

When pumpkins and plants under the cucurbit family have sunburn, the area becomes white, and the center part of the burned area usually rots inside. Usually, the pumpkin fruit will experience another wave of fungal disease from its sunburn wound.

According to the University of Delaware, growers must continue spraying fungicide solutions until the pumpkin nears the harvest day. Doing so will ensure that the stem remains healthy and not plagued with fungal diseases and rot.

How Hot Is Too Hot for Pumpkins?

Though pumpkins love full-sun exposure, it’s a different story when it comes to extreme heat. Temperatures that range from 85°F to 90°F can cause the premature deterioration of pumpkins. The ideal time to pick pumpkins for storage is 50°F to 75°F.

Extreme heat increases the risk of pumpkins developing fungal diseases and rot. If you plan to keep your pumpkins during the hot season, you may coat them with vinegar and water to remove any fungal spores or bacteria sitting on their skin.

Aside from adequate sunlight and warm temperature, pumpkin plants also require other factors to produce more yield and big fruits. These include:

Pumpkin vines are invasive. They can travel across your lawn for as long as 20 feet. If you plan to grow more than one pumpkin plant, you must ensure that you can allot as much as a 10-foot distance between them.

In some cases, gardeners with limited space use trellis or elevate the vines to accommodate more than one pumpkin plant.

Pollinating pumpkins can be challenging because of two things. First, the female flowers can die within a day. Second, the flowers need insects or human intervention to pollinate the male and female flowers.

So, as much as possible, place your patch in areas with high traffic of beneficial insects. You may also plant some flowering plants next to the pumpkins to invite bees and other pollinators into the patch.

Pumpkins need more water than fertilizers. The common reason why pumpkin leaves turn yellow is due to underwatering. Inadequate moisture in the soil can also affect the development of pumpkin fruits.

During spring, you can water the pumpkin once a week, while in summer, you must double it up to compensate for the excessive heat from the scorching summer season.

Continuous spray of insecticide and fungicide

Fungal diseases and pests will attack your pumpkin plants during their early stages of growth and even after the fruits are cut from the vines. Since pumpkin grows on the ground, they are more susceptible to soil-borne diseases and pests.

Some gardeners stop spraying fungicide when the pumpkins are ready for harvest. However, spores and other pathogens may continue to attack pumpkins, especially if they are left in the ground under extreme weather conditions. Extend your fungicide spray until the pumpkins are off the ground and placed in storage.

Tips For Exposing Pumpkin Plants To The Sun

As a pumpkin grower, know when to protect your pumpkin plants and dry them against the harsh sun through the following tips:

How much space do pumpkins need?

Pumpkins need 5 to 10 feet of distance between each plant. Their vines are invasive and will immediately occupy the space within 1 to 2 months.

How do you protect a pumpkin from the extreme heat?

You may protect young pumpkins using row covers. They will keep the harsh sun and insects at bay while the seedlings are busy hardening their stems and developing more leaves. The best way to protect mature pumpkin plants is to equip them with lots of water.

When should you plant pumpkins outside?

Ideally, it’s better to start pumpkin seeds in the ground. However, for those who start their seeds indoors, the best time to plant them outside is when there is no longer threat of frost. The best month is usually around May or June.

Should I cut off dying pumpkin leaves?

It is okay to remove dying pumpkin leaves because they can harbor pathogens of fungal diseases. Pruning pumpkin plants and removing dead leaves also helps boost plant health and speed up fruit development.

One of the techniques of pumpkin growers is removing some of the female flowers to divert all the plant energy into growing one giant pumpkin fruit.

Do I need to cover my pumpkins?

One of the best practices is to protect young pumpkin plants with row covers during the first weeks. During the early stages of development, the plants are still weak and do not have enough stress tolerance against pests and extreme temperatures.

Can you overwater pumpkins?

Yes, poorly draining soil can cause the roots of the pumpkin plant to rot and drown. When the roots can no longer access the soil nutrients due to excessive water, they will become nutrient deficient and die.

Can I plant pumpkins in June?

Yes, you can plant pumpkins in June. However, the planting date should depend on the variety of pumpkins you wish to grow. Some pumpkins grow early in the season with 90 to 100 days of maturity, while others are in the late season and take 115 to 120 days.

Can you grow pumpkins in summer?

Yes, early summer is the best time to grow pumpkins when the days are longer. The maturity of the plants will end just before the ground starts to freeze during fall.

A whole field of gigantic pumpkins is a spectacle to watch. Gardeners share a fascination with seeing a tiny pumpkin seed turn into a humongous fruit. It’s just one of the incredible abilities of nature!

We hope that this post answered your question about the sun requirements of pumpkins. They may love the sun, but extreme heat is still an exception due to its threat to the pumpkins’ deterioration and rotting. Consider showering them with more water to help them protect themselves during hot summer seasons reaching 85°F to 90°F.

Share this valuable information with your friends and help them grow pumpkins this season!

Do you have some pumpkin growing secrets? Share them in the comments below and help more novice gardeners fall in love with pumpkin cultivation. Enjoy gardening, and we hope you have more than one pumpkin to carve and cook during the fall season.