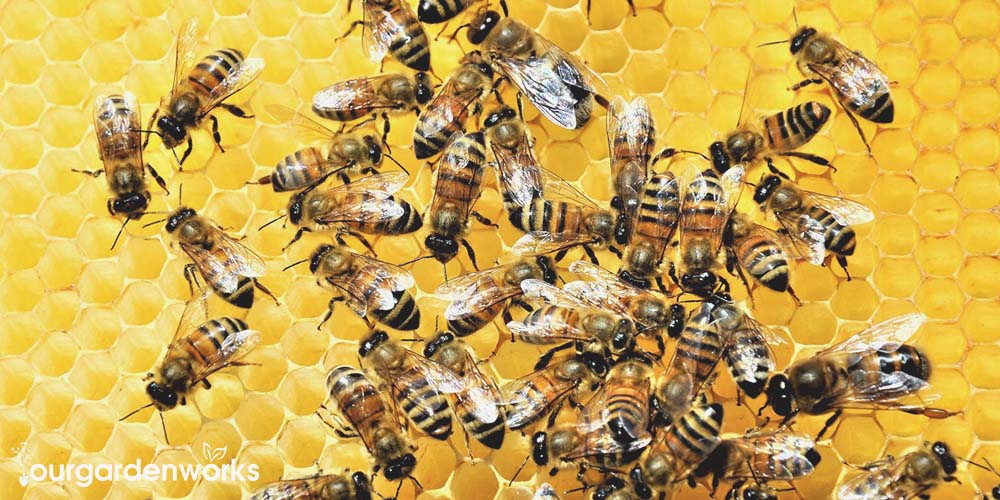 Although there are more than 210,000 US beekeepers, most are hobbyists with 24 hives or less. Only about 2,000 have commercial operations with 300+ hives.

And now, the bad news:

Bee populations are declining due to habitat destruction, climate change, fertilizers, pathogens, pesticides, and so on. First observed in 1947, it’s still going on. In 2019 alone, US apiarists lost more than 40% of their colonies.

And that’s not all.

Each year, the loss of bees puts at risk 35% of the world’s food production – and at least 90 crops that bring in over $24 billion to the US economy – all of which depend on bee pollination.

The good news? You can be a hero.

You can multiply your beehives and increase bee populations.

At the same time, while hives can be split anytime during the bee season, knowing when it’s too late can save you a lot of time, money, and frustration.

This guide explains when it’s best to split beehives and when it’s too late.

Aside from helping in the national economy and human survival, what’s in it for you?

Profit. And were not just talking honey.

Compared to the $4.74 billion honey industry, annual profits from hive rentals to fertilize crops in the USA is worth $15 billion.

Bees are most active in warm weather (about 95⁰F) and the flowers are in full bloom, which is called nectar flow or pollination season.

If you’re in or around North Dakota, Montana, California, or South Dakota, your bee season begins in the spring, continues throughout the summer – even into the fall. In colder climes, however, bee season is shorter while tropical climates have year-round bee production.

Why is this important to you?

First, your location determines weather, temperature, and rainfall, which determines if you have a longer or a shorter bee season. Second, your bee season determines the best time to split a hive – and when it’s too late.

A split can be made at any time of the active bee season, which begins when temperatures warm up in the late spring. The following signs help beekeepers prepare to split their hives before swarming begins.

At the same time, keep in mind that bees don’t go by our rules. Instead, they behave according to location, weather, pollen and nectar supplies, rainfall, and so on. Consult experienced local apiarists for best information.

PRO TIP: When splitting a hive in the spring, you are using the swarm’s queen cells so there’s no risk of the new hive rejecting the queen, and no need for the hive to acclimatize to the queen.

If you’re just starting, any pro apiarist will tell you to know each part of your hive, which is key to the hive splitting process. Let’s do that now.

In apiaries, bee cultivation revolves around hives, defined as manufactured homes for bees. Modern bee colonies can live in multi-storey brood nests in the Langstroth or Dadant design.

In any case, bees and humans work together to create each hive.

While the beekeeper provides the box with cover, base, and about 20 frames with foundations sheets, the bees complete the hive by excreting propolis and creating wax combs.

The 10-frame US standard hive has the following key parts.

3. Why You Should Split a Hive?

If you don’t split the hive, it will split itself by swarming. Thenew hive will have limited resources, produce little or no honey, and may not survive winter. Meanwhile, the parent hive has to rear a new queen and this will delay brood production for a month or more.

Compared to buying bee packages, nucs, or full hives, splitting your own hives is much cheaper. In addition, here are the most important reasons why you should split a hive; to:

You now know when it’s best to split a hive and when it’s too late. Next, you should update your hive-splitting procedure.

In the bee yard, the term “splitting” can mean (a) splitting one strong hive into several smaller hives or (b) pulling a smaller (nuc or nucleus) colony from an existing hive into a new hive.

The three most common ways of splitting a hive are:

Your choice depends on three things: (a) you can locate the queen, (b) you want to buy a new and younger queen, or (c) you want the colony to have a queen that they reared.

PRO TIP: Use a queen cage that provides the bees with more access to the queen’s pheromones. The cage provides a safe and controlled area for the queen bee to lay eggs immediately before she is released into a new hive.

Whatever your choice, the easiest way to split a hive is to install a nuc.

You will only need two things: a hive tool and a bee smoker.

Basically, you take a mini-hive – including the frames – and move it to an empty home where it can grow into a bigger hive. You choose the frames, you place them in a full-sized hive box, and you’re done!

A typical nuc has about 5 frames: two outer frames that hold honey and pollen, and three inner frames that hold brood of all stages (eggs, larva, pupa) as well as adult bees (nurses, cleaners, guards, foragers, drones, queen, and so on).

Here are the four key steps to install a nuc.

PRO TIP: In the spring, nucs can grow rapidly. If you’re using an interim box, move them to a standard-sized hive within three weeks.

Careful now. A capped honeycomb cell is different from a capped worker brood comb or a capped drone comb.

Here’s a video (source) that shows this process with an 8 frame hive.

PRO TIP: After moving all the nuc frames to the new beehive, you can add more frames to maximize the box. Example: if you removed 6 frames from a 10-frame box and moved a 5-frame nuc in, add one more frame to a total of 10 frames.

PRO TIP: You can buy a feeder or make it yourself. Here’s a video (source) about free and easy honey bee feeders.

1 thought on “When Is It Too Late To Split a Hive? – The Complete Guide to Splitting a Hive”

What Are The Best Fertilizers For Geraniums? – Reviews & Top Picks (2021)