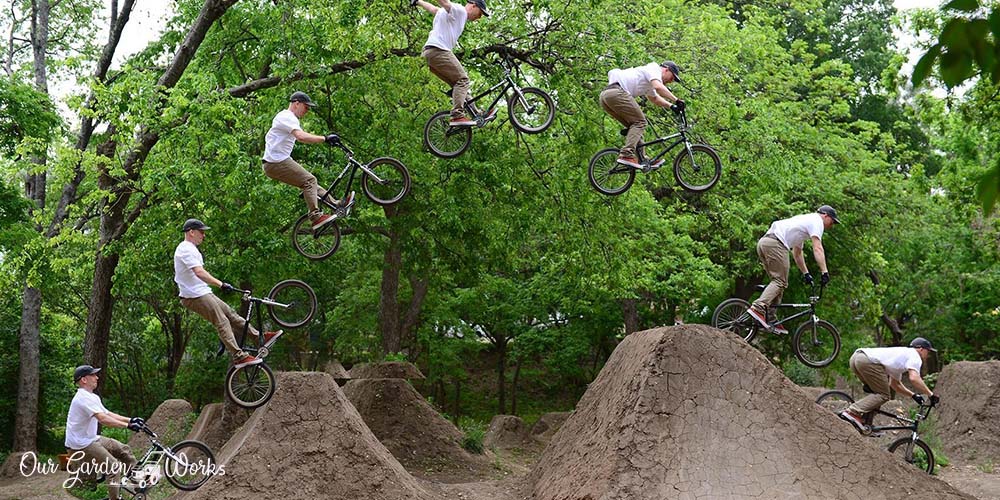 Turning your unmaintained backyard into a dirt jump practice arena is a good way to maximize your space. Just imagine having unlimited time to practice your jumps and just enjoy the adrenaline-inducing sport of jumping.

The art of building dirt jumps in your backyard takes dedication and determination. Doing the endless digging and shaping can be exhausting but it’s worth it, especially if you start dirt jumping.

In this post, we’ll teach you how to make tabletop and double dirt jumps in your backyard using simple gardening tools.

We’ll also share some tips and the safety consideration you have to make when testing out the dirt jumps. But before we head to the procedure, let’s start with the basics of dirt jumps.

What is a Dirt Jump?

A dirt jump is a mound of dirt that is used for practicing dirt jumping for both bikers and motorcycle riders. Races for BMX and motorcycle competitions take place in race tracks filled with dirt jumps. That’s why certain VBMX models and bikes are specially made for dirt jumping.

Since the COVID pandemic came around, most of us were restricted to go out and so does BMX riders. But if you have an empty backyard, you can build your dirt jumps and ride all you want while being safe inside your property.

Before you start digging your lawn, make sure that you consider the size of your backyard and run in that need to have a smooth landing.

Here are the different types of dirt jumps to help you identify what kind of dirt jump you’ll build in your backyard.

Types of Dirt Jumps You Can Build in Your Backyard

Either you have a big backyard or a mid-sized one, we listed all the possible dirt jumps you can build on your own. Let’s start with the basic – tabletops.

One of the beginner-friendly track that is mostly 2 feet in height. It’s a good practice dirt jump since you can easily land and regain your balance if you get sidetracked. It also has a flat top where its name is derived since it resembles the shape of a table.

Another beginner dirt jump that requires three skills to have a smooth and successful ride. You’ll need to learn how to do a pump, manual, and bunny hopping. The only difference it has with tabletop is it doesn’t have dirt mounds in the middle.

That means bikers have to land on the other end since there will be no dirt that will support their weight when they go off track.

Another simple dirt jump that you can build inside your backyard. This type of dirt jump helps you practice with your pumping tricks. You can either make one or multiple rollers depending on the next dirt jump in your track.

Several types of jumps are steep and may not be suitable in a typical backyard. However, if you’re up for some challenge or training for a competition, here are the advanced dirt jumps you can build around your back yard:

Pro tip: We recommend that you start with the beginner dirt jumps like tabletops. Once you get used to it, you can always reshape the dirt jumps and rebuild them into more advanced dirt jumps like step-ups.

How To Build Dirt Jumps in Your Backyard?

In this post, we’ll only tackle the beginner level dirt jumps such as tabletops and double dirt jumps.

Once you’ve learned how to build these two tracks, the other dirt jumps would just be a piece of cake.

The materials you’ll need for building dirt jumps are almost the same for both doubles and tabletops.

How to Build a Tabletop Dirt Jump?

It’s time to start building your first diet jump in your backyard. The steps are as follows:

How to Build a Double Dirt Jump?

Sports such as BMX and motocross are some of the riskiest in the sports industry. One wrong landing and you may end up with a broken leg or ribs.

No matter how experienced you think you are in the world of biking, always consider taking the following safety measures:

5 Tips in Building Dirt Jumps in Your Backyard

Building and maintaining dirt jumps is another level of love for the sport of dirt jumping. It’s mostly physical work and may consume a lot of time before you finish. However, anything that’s word sweating for will be worth it in the end.

Here are some tips for building dirt jumps in your backyard:

BMX and motocross can get quite addictive especially if you’re learning new tricks in the comforts of your property. Building dirt jumps may be challenging but it’s worth all the muscle aches when you get unlimited jumps in return.

We hope this article has helped you build your dirt jumps in your backyard. With an unlimited chance to practice, who knows you might qualify for the next BMX tournament!

If you find this post helpful, share this with your friends and help them practice their jump tricks in their yards too!