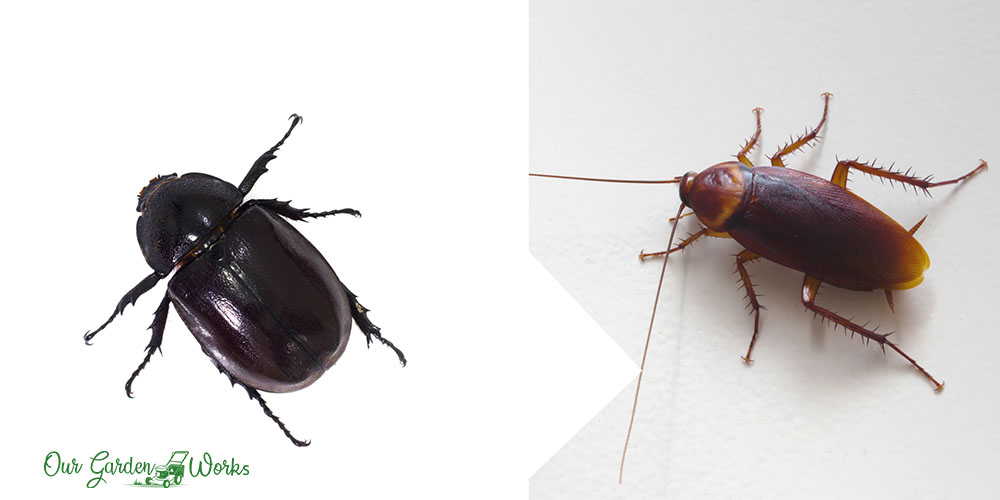 Anything black that flies across the room, feeling like a butterfly, can be easily mistaken as a cockroach. However, some innocent beetle might be taking the blame for what the cockroach did. Learn the difference between these two insects by knowing more about the beetles that look like cockroaches.

There are tons of cockroach and beetle varieties that make it hard to distinguish which is which. Some of us are so afraid of insects that anything black that flies and has the shape of a cockroach will immediately look for roach killers.

While it’s easy to spray and kill insects in your home, some disadvantages come in mistaking beetles as cockroaches. These include:

In this post, we aim to bring justice to the beetles that are wrongfully accused as cockroaches by helping you identify them better. But first, check out the similar traits of cockroaches and beetles that might confuse you.

What Are The Similar Traits of Cockroaches and Beetles?

A typical beetle has a stout body and hard shell, while a cockroach has a thin body with black and reddish wings. However, some types of beetles look similar to cockroaches with the following features:

Here are some of the types of beetles that look like cockroaches at a glance. They resemble in color, shape, and legs that make people think they’re cockroaches.

Ground beetles are the common type of beetles in North America. They have six long reddish-brown legs with spikes similar to cockroaches. They are commonly thought of as cockroaches because they move and run like one.

Ground beetles also resemble the oval body shape of cockroaches. You’ll distinguish them through their distinct intense stench, two pairs of wings, and a small head. They are often active at night and may occasionally visit your home in pursuit of their prey.

As an essential part of the ecosystem, ground beetles aid in pest control in agricultural lands. They eat aphids, caterpillars, slugs, and soil-borne pests. Some ground beetle species also feed on weed seeds.

Wood-boring beetles are often mistaken as cockroaches due to their legs and oval-shaped body. However, one feature that gives their identity away is they are slow-moving and do not run at the sight of humans.

Wood-boring beetle infestation is a problem for some homeowners. To get rid of these beetles, they throw away infested furniture and purchase tools like a heating gun to keep them off the house.

The Palo verde beetle got its name for its impact on Palo verde trees in Southwest America. Its larvae or grub feed on the roots of Palo Verde trees. The adult beetle, on the other hand, is one of the largest beetles in North America that spans around 3.5 to 6 inches long.

Palo verde beetles are often mistaken as cockroaches because of the following features:

The lifespan of a palo verde beetle can only last for a few months and dies as soon as they mate. It does not eat during the last stage of its life cycle and only comes out of the ground to mate in summer. It is entirely harmless but can bite in self-defense when provoked.

Palo verde beetles are bigger compared to the usual size of roaches. However, if you see them at a glance or from afar, it’s easy to mistake them as cockroaches. They are pretty tough to kill because of their hard covering.

These large beetles are strong, and you can’t squish or swat them. They also feed on nectar and fruits during the mating season. So, if you have fruit trees around, you’ll likely see them in your yard. They start to roam around in July and last around September.

The good thing, though, is Palo verde beetles die immediately once they mate. So, make sure to let them roam around and find a partner to get rid of them on your property. They may look freaky and are often called demon bugs, but they are harmless.

It’s quite amusing how some people mistake the spotted Asian longhorned-beetle (ALB) as cockroaches. They are notorious for boring holes on hardwood trees that caused the removal of thousands of trees in the US.

ALB have long antennae and fast-moving behavior that makes them look like cockroaches at a distance. However, they also have distinct irregularly-shaped white spots and shiny hard wings.

They find their host to lay their eggs and spread, like wildfire, causing havoc on healthy trees. The larvae bore huge pencil-sized holes on trees allowing them to die eventually. Their favorite host trees are:

June beetles or bugs are stout small beetles that feed on grass, flowers, or foliage. They have long spiked legs and shiny reddish-brown coats that make them look like cockroaches. The larvae of June bugs are commonly known as white grubs.

White grubs are among the notorious soil-borne pests in lawns and gardens since they feed on the roots of grass and plants. Mature June beetles are food to other animals like birds and wildlife animals. In some parts of the world, they are even considered edible and a delicious source of protein since they only feed on leaves.

Carpet beetles are small rounded beetles that feed on wool and any plant-based fiber in households and gardens. They have strong mandibles that enable them to feed on leather carpets and fabrics. If not cockroaches, they are often mistaken as bed bugs or clothes moths.

You can distinguish carpet beetles through their rounded shape and irregularly-shaped white patches on their wings. They also don’t have long antennas, unlike cockroaches.

Soldier beetles have long oval-shaped bodies and antennas that make them look like cockroaches. They are beneficial insects in the garden and feed on smaller insects like aphids, caterpillars, and other soft-bodied insects. They don’t cause damage to plants, but like other beetles, they feed on nectars in the absence of small insects.

On rare occasions, soldier beetles may sneak into your house through open windows or cracked window sills in pursuit of their prey. They are harmless, and it’s best to leave them untouched to serve as your biological pest control in your garden.

Click beetles are among the common insects in the garden known for their click sound. They have oval-shaped bodies and six long legs, making them look like cockroaches. They run fast, especially the smaller ones.

Aside from their distinctive sounds, click beetles are spring-loaded insects that can jump against predators and make themselves upright when they are toppled over. They are 0.79 inches (2cm) long and have two big eyes. They don’t bite and are entertaining to watch when they click.

The Black caterpillar hunter is a three inches long type of ground beetle that feeds on caterpillars at night. It is fast and bites when provoked. It stays under rocks during the day and works as a vampire at night, looking for its prey.

Most people think they are a type of cockroach because of their oval-shaped body, antenna, and long legs. When you look closely, you can distinguish them through their big body and visible mandibles or teeth.

Sawyer beetles look like a combination of a spider due to their widespread legs and a cockroach for their long antenna. It wanders around in the ground and trees looking for caterpillars around.

Some sawyer beetles produce odd sounds when they feed on infested wood. You may often hear them chewing off some prey inside newly cut pine trees and caterpillar-infested trees.

Whirligig beetles grow in bodies of water like lakes, rivers, and ponds. They have oval-shaped bodies and spiked legs that make them look like cockroaches. They live in water, so there’s a lower chance that you will find them at home.

Unlike other beetles, whirligig beetles are carnivorous and feed on smaller aquatic insects and remains of dead insects floating in the water.

Differences Between Beetles and Cockroaches

While some types of beetles resemble cockroaches, some common differences can help you distinguish each of them. Here are some of the obvious features to look for:

Cockroaches have papery-thin wings with leaf-like veins and fold on top of each other. Beetles, on the other hand, have hard wings called elytra that close in a symmetrical pattern.

The wing veins are straight and parallel when they close. The hard wings often serve as a maneuver and protection to their real wings underneath.

The life cycle of a beetle starts from egg, pupal stage, larva, and adult. Cockroach, on the other hand, undergoes incomplete metamorphosis. Baby cockroaches look like adult cockroaches, while beetles have several life cycle stages.

Cockroaches usually hide their heads while their antennas are poking out. Beetles are proud of their heads and mandibles. They show it off, especially when there are predators around.

Identifying insects that roam and damage your plants or interior furniture is essential for effective pest control. Failure to do so can lead to a waste of valuable resources and even killing beneficial insects for your garden.

We hope this post helped you know more about beetles and spare them from the chemical sprays you’re planning to use. They may look ugly and creepy, but some are harmless and just passing by to say hello.

Let us know in the comments about the beetles that look like cockroaches you encountered at home or outdoors. We’d love to hear your stories and discoveries!

Also, please don’t forget to share this post with your friends and family to help them know the difference between cockroaches and beetles.