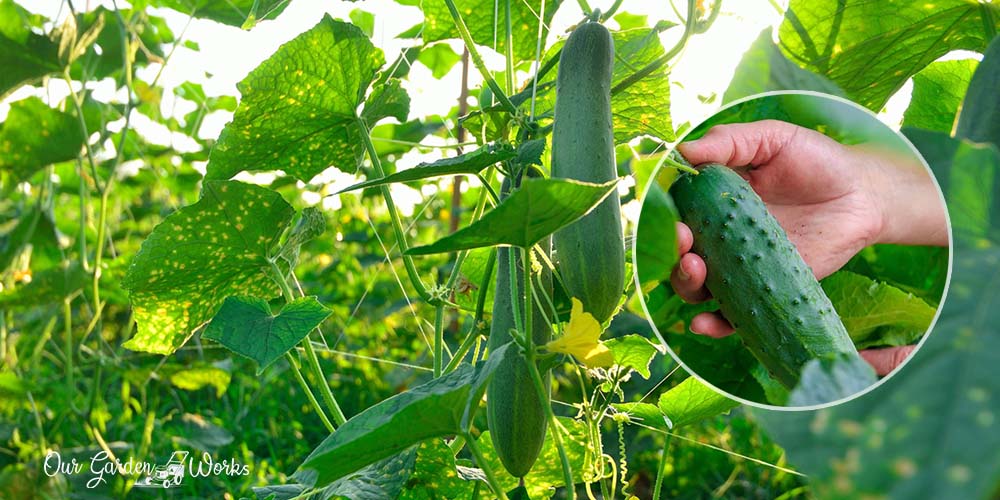 Nutritious. Green. Crunchy. A bowl of green salad will never be complete without freshly picked cucumbers. Knowing when to pick cucumbers is the key to extracting the best flavor and crunchiness cucumbers are known for.

Late harvest and improper picking techniques will both cost you bitter cucumbers and a wounded cucumber plant with fewer fruits.

Discover the best practices you should cultivate as a cucumber parent so you can harvest more quality slicing and pickling cucumbers.

Q: When To Pick Cucumbers From Your Garden?

Cucumbers belong to the type of fruits that you should pick before they ripen. Generally, they are at their best as soon as they turn green and seeds develop.

Some varieties, however, have specific harvesting methods, especially when they are used for a specific dish or fermentation method.

For new cucumber growers, here are some of the signs that you can already harvest your cucumbers:

The size of the cucumber is the easiest indication to spot. The ideal length for picking cucumbers depends on the variety and the purpose.

Pickling cucumbers must be thin-skinned, stout, and short to achieve the best flavor when they are pickled. Pick them when they reach 2 to 6 inches long.

Slicing cucumbers are the typical cucumbers we use for salads and they are best picked when they reached 6 to 7 inches long. Burpless cucumbers are best known for having the thinnest skin that makes peeling unnecessary when you eat them.

You may use a plant tag, a simple note under a ref magnet, or a calendar note to remind you when to pick cucumbers in your garden upon sowing.

#3 Fruits Have Fewer and Softer Seeds

Aside from getting bitter, cucumbers are picked immediately as soon as they are ready to prevent the seeds from getting thick and tough to chew.

For sure, you won’t see the seeds from the outside but knowing this will give you the sense of urgency to pick them as soon as possible.

#4 The Skin Is Crisp and The Flesh Is Firm

Pick cucumbers when they have no sunken spots, lumps, and wrinkled ends. When the skin is too soft and pressing the fruit feels mushy, soft rotting has already started.

Cucumbers are abundant in water, so they are more prone to rotting and attract decomposition organisms faster than other fruits.

#5 After Pruning The Vine Cucumbers Late In The Season

Pruning vining cucumbers are essential for an abundant harvest and training of vines. It is often done to keep the outrageous vines stick to a vertical support, keep the whole plant tidy and preserve its energy to produce fruits.

How to prune cucumber vines?

Pruning cucumbers at the wrong time and wrong manner can do more harm than good. The best instances to prune your cucumbers vines are when:

Female flowers of cucumbers have a tiny bump on the stem where the fruit will emerge. As soon as the buds start to open, the fruits will be ready for harvest after 8 to 10 days.

Cucumbers are fast-growing, so you need to have a watchful eye, or else you’ll delay the harvest and end up with tons of bitter cucumbers.

#7 Before They Show The First Signs of Yellowing

Cucumbers turning yellow are already overripe, lumpy, and bitter. Unlike other fruits, cucumbers ripen on the vine at different intervals.

On a side note, there are varieties of cucumbers that are naturally yellow from the get-go like lemon cucumbers.

Check the packet of cucumber seeds that you bought to verify the cucumber variety you are growing.

Since there are different types of cucumbers, there are specific signs that will tell you when to harvest them based on variety. These include:

The secret to a delicious pickle is the quality and the time when the cucumber is harvested. Here are the ideal sizes of the cucumbers for harvesting based on their purpose:

If you want a sweeter cucumber, harvest them early because they contain the most sugar when they are young.

To achieve the crunchy texture of cucumbers that you intend to add to your salads, you have to harvest them when they reach 6 to 8 inches.

You can still pick them at 9 inches, but you will taste slight bitterness. If you go way beyond that size, they will taste bitter and unappetizing enough to add to your meals.

What Happens If You Delay Harvesting Cucumbers?

Leaving cucumbers on the vine for too long will not immediately lead to rotting. However, the fruits will taste bitter, turn yellow, and slow down the production of new cucumbers.

As long as the fruits are still attached to the plant, they will continue to receive nutrients and spend the plant’s energy.

Instead of developing new fruits, the plant continues to ripen the bitter cucumbers until they rot, get mushy, and decompose.

Do Cucumbers Ripen After Harvesting Them?

Cucumbers will not ripen post-harvest so make sure that you cut back the upcoming fruits before the season changes.

Prune or cut off flowers a month before the first frost of fall to help the plant pour all of its energy towards the developed fruits that are almost ready for harvesting.

Harvesting cucumbers is straightforward but should be handled with care. Here are some helpful reminders to harvest more cucumbers throughout the season:

Freshly harvested cucumbers should be placed in the fridge to keep them crunchy and firm.

Slicing varieties stay fresh in the fridge for 3 days while pickling varieties can remain crisp and fresh for 5 days even if they are not refrigerated. Cucumbers will get damaged if you place them in temperatures 45℉ to 50℉ or too close to the freezer.

Since cucumber provides an overwhelming number of fruits, you can keep some in the fridge and preserve the rest. Cover the cucumbers in paper or paper bags to prevent moisture buildup. Some people use wax to prevent the skin from losing moisture.

For the excess harvests, you can try any of the following preservation methods:

How To Extend Cucumber Season?

Let your cucumber live longer than they should before the fall season by following these tips:

How do you know when cucumbers are ready to be picked?

When cucumbers are firm, green and about 6 to 8 inches long, they are ready for harvest. Pick them immediately to keep them sweet and crunchy and for the plant to produce more fruits.

Why are my cucumbers prickly?

Some cucumber varieties naturally have some prickly skin, especially the slicing varieties. You can easily brush off the hair or spikes using a spare toothbrush upon harvest.

If you want something smoother, you should grow pickling and burpless cucumbers because these cucumber varieties have thinner skins, which makes them ideal for pickling and fermentation.

What is the best time of day to pick cucumbers?

The best time to harvest cucumber is from 6 AM to 7 AM when the sun is about to rise and the vines are covered with dew. Many gardeners believe that early morning is the time when cucumbers are at their sweetest level.

If you know when to pick cucumbers, you will most likely never experience eating a bitter-tasting cuke. As a plant, cucumbers are fast-growing and very generous as long as you keep them tidy and pruned, healthy with cucumber fertilizers, and watered adequately.

We hope that this post helped you become a better cucumber grower and produce a high-quality yield that you can share with your family and friends. You might even end up selling them in the farmer’s market if the quality exceeds the home-grown cucumber quality.

Cucumbers are healthy and nutritious and having them in your yard will help encourage your family to eat more fruits and vegetables. Across the globe, there are tons of dishes and drinks made out of cucumbers. How do you prepare your cucumbers at home?

Do you want them added to your vodka, rolled in bibimbap, or pickled to add some tangy flavor to savory dishes?

Let us know your favorite cucumber dish or drink in the comments below!