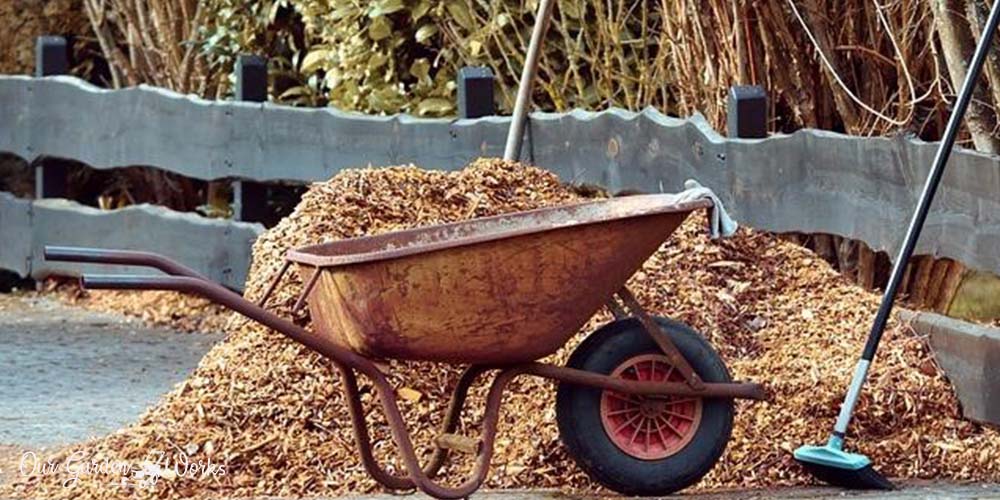 Are you wondering what to do with old mulch that is already hard and dry?

You’re not alone. Many gardeners also find it hard to know if old mulch would still serve its purpose.

Therefore, making it hard to dump it immediately after they clean up vegetable and flower beds.

Since mulch is quite expensive, you’re also probably hesitant to throw it away. Aside from wasting money, getting rid of old mulch is like throwing away a viable organic fertilizer. After all, it’s a biodegradable material that decomposes over time.

Let us help you finally do something about your pile of old mulch.

Q: What To Do with Old and Used Mulch?

A: Old mulch can still serve its purpose if you can distinguish it from the soil. If the old mulch is already broken down into bits and no longer recognizable as a mulch, then it’s better to be used as a soil amendment.

Even if mulch costs a bit higher than some gardening essentials, its value lasts until it decomposes.

When added to the soil with compost, old much can nourish the plant bed with the nutrients it needs for growth and development.

Aside from covering the soil from extreme weather conditions and keeping weeds off, mulch serves as a slow-release fertilizer at some point.

It slowly releases nutrients to the plant bed until it decomposes. However, non-biodegradable mulch like plastic won’t likely do the same.

If the old mulch retains its texture and size, you can still use it as-is. It can remain as a good cover for the soil.

Though it is tempting to get rid of the old mulch altogether, don’t take its value for granted.

It can still provide the following benefits to your soil:

However, it might be too settled and not enough to provide adequate coverage on your bed soil. A layer of mulch should be 3 to 4 inches high. Add new mulch on top of the old ones to fill in the appropriate coverage to the bed soil.

Old mulch is bound to be compact and clump on the ground after a growing season. You may use a rake to loosen up the mulch and set it aside on a wheelbarrow or at the side of your garden. Check if it is still viable as a mulch.

Once the mulch features are still recognizable from the old mulch. You can put it back on top of your bed.

Keep the thickness at 3 to 4 inches and add new mulch as needed. The thickness of mulch in your bed matters a lot for its optimal performance.

Mulch that is too thin is not effective in keeping stubborn weeds out of your bed, while too much thickness will limit the water absorption in the soil.

As plants go through the growing season and dormancy, mulch also goes through the same thing.

When they get infected and infested with insects, mulch becomes a second home to overwintering and soil-borne pests and pathogens.

So, there are some exceptions in reusing old mulch.

All things have their end and so does the life of a mulch.

Over time, mulch that’s reused for a long time can be worn down. It breaks down into bits after being exposed to harsh sun, winter, and water since it’s an organic matter.

However, dealing with worn-down plastic mulch is a different story.

If the old mulch is close to decomposition, you can use it during soil preparation as a soil amendment.

For better performance, mix the old mulch with compost before adding it to the soil. Use the spade to allow the compost and mulch mix blended on the bed soil. Apply new mulch on top of the bed accordingly.

According to Dr. Chalker-Scott of the University of Vermont, grass clippings are a good mulch to plants but it decomposes faster than other types of mulch.

If it decomposes, you can mix it with compost and work it under the soil bed as an organic soil amendment.

She also mentioned that wood chips are the best mulch for trees as it can retain water that is slowly released to the soil and more effective in cooling the soil temperature. Mulch as a fertilizer acts like fertilizer with a 4-1-2 NPK concentration of 4% nitrogen, 1% phosphorus, and 2% potassium.

By applying mulch correctly as a soil amendment, healthy microorganisms will feed on the organic matter and release wastes that are beneficial to the soil. Thus, helping the soil become more fertile and less compact.

Funny how nature can indeed sustain itself, right?

However, there are certain circumstances where the old mulch and wrong practices in adding them can do more harm to your plants.

For lawns, let the clippings sit around on your lawn soil after mowing. It will serve as a natural fertilizer and saves you from spending on lawn plant food.

It’s essential to cut the clippings small enough to allow them to settle and decompose well on the soil and avoid matting.

Mulch is a layer of gardening material that plays an essential role in feeding and protecting your plants from external elements like temperature changes and soil-borne diseases.

It also helps in keeping weeds off your plants and improves the look of your garden.

The type of mulch widely used by most gardeners is organic. It is usually composed of:

Commercial plantations mostly use inorganic mulches to cover vegetables and plants. Black plastic mulch protects the fruits of vining fruits and vegetables from rotting when they touch the ground.

Wrong application of old or new mulch can import plant diseases and pests to your plants or kill your plants.

Here are some things to avoid:

The Other Type of Mulch: Cover Plants!

Some farmers use living mulches or cover plants to keep the soil loose and protect the bed soil from extreme weather conditions.

This type of mulch can also serve as good compost material for your plants in the long run.

You can use a mower or a rake to mix it into the bed and allow it to decompose with other compost materials underneath the soil.

Should Mulch be replaced every year?

Not necessarily. You only need to replace mulch if it shows signs of decomposition and if it is from plants infected with pests and diseases.

Otherwise, you can keep using it as mulch and add new ones to maintain the ideal layer thickness.

Can you still use moldy Mulch?

Yes. If you have stored mulch long enough for the mold to take it over, you can still use it. Spread it out on concrete and let the sun sanitize, and remove the mulch molds.

If ants and other pests start to creep into the mulch, you may use soapy water to control them.

What type of Mulch lasts the longest?

Bark type mulches can last for 7 to 10 years. Cedar mulch, in particular, lasts due to its resistance to decay. The oils of cedar mulch also help repel insects. However, they don’t have many nutrients as other bark-type mulch.

The art of mulching is easy to master if you know how every type of mulch affects your plants.

We hope that you’ll either reuse or repurpose your old mulch and keep them valuable as they decompose.

Mulch from infested plants must be disposed of to prevent spreading pests and diseases to other crops.

We hope that this post has helped you with what to do with old mulch and discover its potential. It may not look as pretty as new, but it costs the most savings for most gardeners.

If you find this post helpful, leave a comment below and share it with your gardening community. Let us help create a community for more sustainable gardening.

1 thought on “What To Do With Your Old Mulch: Reuse or Repurpose?”