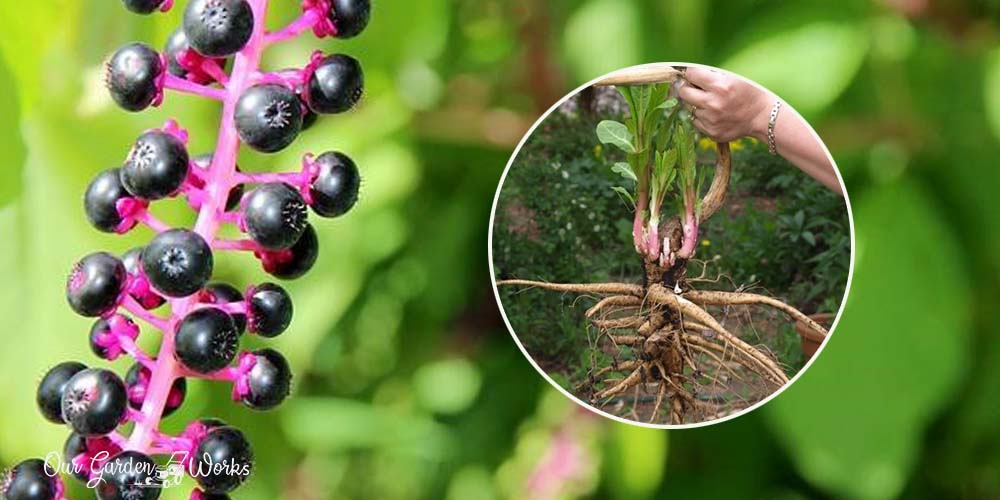 Pokeweed or Phytolacca americana is an interesting and intriguing herb that grows in the northern and southern parts of the US. There have been several debates and myths about its uses and toxicity.

Gardeners have long been on a long mission to learn how to get rid of pokeweed for good since they are very invasive and run deep, like dandelions.

The deceiving and delicious-looking fruits and parts of pokeweed are responsible for a lot of poisonings in the US since the 19th century. It is tagged as the Vegetarian’s Puffer Fish by the New York Times magazine for its toxic traits. On another note, some people have been consuming it while growing up.

Most people from the southern US say they’re edible and a cure to multiple illnesses like cancer and arthritis. However, pokeweed remains a mystery in the lens of science, and there are no human trials that have been conducted yet. Maybe it holds healing traits. We just don’t know it yet.

In this post, we will discuss several methods for getting rid of pokeweed and its other uses. First, let us identify the reasons why you should get rid of pokeweeds on your property.

Reasons Why You Should Get Rid of Pokeweed in Your Garden

All parts of the pokeweed are toxic. The most toxic of all is the root which should never be consumed. The stems have less toxicity, while the fruits hold the least toxic of the three.

They have beautiful magenta-colored branches and grape-like fruits. So, why bother removing them?

(1) The fruits can lure your curious kids into eating them like the usual berries. Though it has the least toxicity, pokeweed fruits are deadly to babies and toddlers (even to pregnant women). Their immune systems are not mature enough to handle the toxins in the fruit.

If you have pets and children that roam around your property, it’s best to cut pokeweeds for good.

(2) According to the University of California, a single pokeweed produces 1,500 to 7,000 seeds every year. The pokeweed seeds are more toxic than the flesh of their fruit and can stay in the ground for several years.

So, as long as the pokeweeds in your yard continue to bear fruits, you’ll be on an endless track of removing them.

(3) Pokeweeds run deep in the soil and their roots are more fleshy than dandelions. They grow fast and can rob nutrients and moisture from your desired vegetable plants or ornamental plants in the garden.

The Impact of Pokeweed on Your Health

Every part and juice of pokeweeds causes varying reactions to humans. Some people are more sensitive to its toxins, and some are more immune. It is the reason why it is tagged as unlikely safe by medical professionals unless proven safe by science.

Wrong food processing or preparation of the leaves, stems, and fruits of pokeweed can lead to the following poisoning symptoms after six hours:

The purple extract from the fruits can be absorbed in the skin and cause allergic reactions to some people, leading to hives and rashes. Though some didn’t have the same reaction. Studies are yet to prove its impact on different types of people.

How To Get Rid of Pokeweed in Three Ways?

If you’ve been a victim of pokeweed’s toxicity or its invasiveness in the yard, here are some methods that you can use to remove them for good:

The tedious but effective uprooting of weeds is one of the secrets to a weed-free garden. The goal is to prevent the current pokeweeds from growing and fruiting to spread new seeds.

You have two options in removing pokeweeds. These include:

If the pokeweeds are still young in spring, you can uproot them by hand or using a trowel.

However, if you are removing a full-grown pokeweed with its clusters of fruits, you’ll need some tools like a saw and a shovel. Here’s how:

(1) Wear protective clothes and gloves to prevent any chances of rashes while removing the pokeweed.

(2) Start removing the plant by cutting down its stems. The stems are a blend of succulent and woody textures and are easy to cut. Be careful of the fruits since they are easily squashed and the juice may land on your skin.

(3) Leave around 12 inches of stem so you can pull the roots properly. Start digging the soil around the pokeweed to reveal its long roots.

Gardeners keep searching about how to get rid of pokeweeds because they keep regrowing. Well, it’s because of their taproot. You have to dig up the taproot, which will grow again if left in the soil.

(4) Once you’ve seen the monstrous roots, you can start pulling them out. Be careful in handling the pokeweed roots since it is the most poisonous part of the plant. Never let it touch your skin.

(5) Look for other remaining roots in the soil. Place all the parts of the pokeweed on a tarp and let the sun dry it out so it won’t grow elsewhere. As for the fruits, collect them and dry them under the sun before burning them or throwing them out in the garbage disposal.

(6) If the pokeweed has been in your yard for several years, there’s a higher chance that its seeds are still on the ground. Unearth the new sprouts every spring until they’re completely gone.

Here are some helpful tools for easy weeding:

Remove Pokeweed By Tilling The Soil

The massive growth of pokeweeds can be uprooted well, but their long and crippling roots are still everywhere. You can use a tow-behind tiller in uprooting several pokeweeds in your yard. Here’s how:

Method #2: Use Pokeweed in Different Ways

Getting rid of pokeweed for another purpose makes the removal even sweeter. Despite its toxicity, it has a lot of uses from its stems, leaves, and fruits. Here are some ways you can re-use or consume them.

Use young pokeweed as greens in your breakfast meal

Pokeweed has been part of the history of the US and consumed by the native Indian Americans as food and medicine.

However, there is not enough literature about its use. Though safety precautions are advised, some people in the South grew up eating pokeweed greens.

Note: We do NOT recommend the consumption of pokeweed. Any consumption citation is for informational purposes only. Reader discretion is advised.

With proper preparation of pokeweed leaves, they can be a food source. You can even stash extra supplies and use them as your greens all year-round.

When is the perfect time to harvest pokeweed greens?

The best time to get pokeweed leaves for consumption is when the plant is still young, about two to three feet. When the pokeweed has started to branch, become woody, and bear fruits, they are already too poisonous to eat.

How to prepare pokeweed leaves for consumption?

(1) Cut the stem of a young pokeweed. Make sure that the plant is still around 2 to 3 feet in height.

(2) Peel off the woody or fibrous parts of the stem using a knife.

(3) Wash the stem and remove the leaves.

(4) Cut the leaves based on your liking and put them in a pot of boiling water. Cook the leaves for about 3 to 5 minutes.

(5) Drain the leaves and cook them again on the second boiling water for another 3 to 5 minutes until all the bitterness is gone.

(6) Drain the water and mix the pokeweed greens with scrambled eggs and bacon. According to those who consume them, pokeweed tastes like spinach when cooked well.

Some people in the southern part of the US no longer boil the leaves and consume the stems. However, we cannot guarantee the safety of these practices and only proceed with caution. For the pokeweed berries, several people claim that they are medicine for arthritis and rheumatism.

Below are some theories and practices of some people in using fruits as medicine. There are not enough scientific studies that can attest to the efficiency and safety of these practices in using pokeweed.

These are only a compilation of the many ways pokeweeds are used in the US.

Use the fruits as dye or ink

During the 19th century, pokeweed fruits or berries were used for their beautiful purple color. If you happen to remove a mature pokeweed that has several clusters of pokeweed berries, you can process it to make a fabric dye or ink.

Did you know? Many people think that the ink extracted from pokeweed berries has been used to write the declaration of independence. However, according to scientists and researchers of pokeweeds, it’s a myth and an old wive’s tale.

How to process pokeweed berries into a dye?

Pro tip: Do not place the seeds of pokeweed berries in a compost pit. It will be another planter for new pokeweeds.

We put herbicides as the last resort since it’s better to do non-chemical approaches for the environment. However, if the pokeweeds are out of control and becoming a yearly problem, it’s not bad to use herbicides to control them.

Here are some herbicides containing glyphosate, which is well-known for killing pokeweeds and other notorious weeds in yards:

The organic herbicides usually work for pokeweeds when they are still young and sprouting. Established pokeweeds are already strong enough to resist the effect of botanical herbicides.

If you’re looking for organic ways to kill pokeweeds, here’s a separate post where we listed some of the best organic weed killers in the market.

Whether pokeweed is the next best discovery in the field of botanical science or not, their toxicity should never be underestimated.

Learning how to get rid of pokeweed in a safe method is the knowledge you can pass down to your kids. They will no longer be a victim of its toxic parts as they grow older.

We hope that post helped you learn more about the most intriguing wild weed and its proper removal and disposal. Let us know your thoughts about pokeweeds in the comments below.

Also, please don’t forget to share this post with your friends and inform them about the toxicity of this weed.