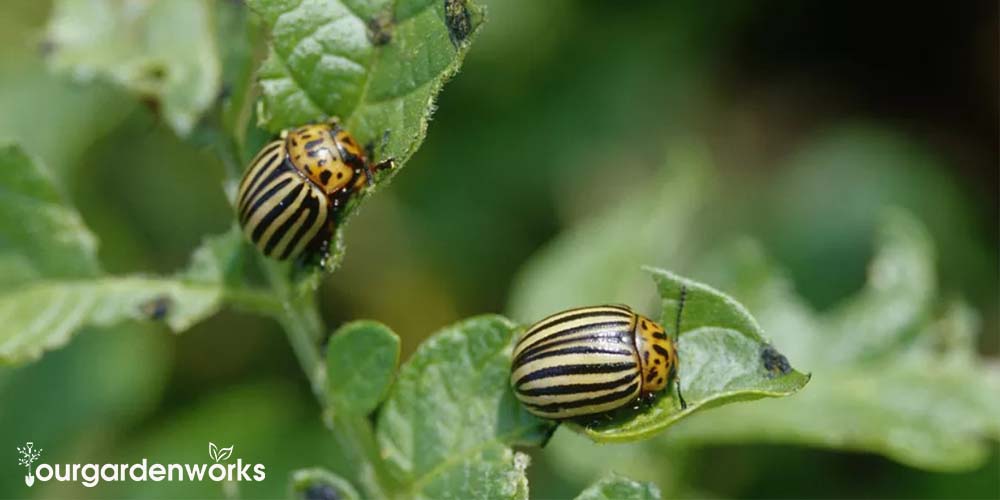 Wondering how to get rid of Colorado Potato Beetle infestation in your garden?

Colorado potato beetles are the biggest cause of problems when it comes to homesteading and growing your vegetable plants in your home garden.

They can cause severe damage to the plants due to defoliation.

In order to truly grow healthy plants and eat fresh and delicious vegetables, it is necessary that you deal with the Colorado beetle pest problem.

To help you get rid of this problem is why we’re here.

We’re also going to tell you a few tips and tricks for controlling and preventing pests from invading your garden.

So, sit back, relax, and read this article till the end.

What Do You Need To Know About The Colorado Potato Beetle?

The Colorado potato beetle also known as the ten-lined potato beetle is an orange-yellow colored beetle characterized by the 5 brown stripes on the elytra of the beetle.

The Colorado beetle is a major plant pest that is native to America but is also found in other parts of the world.

If you’re on your journey to becoming self-sufficient, then growing your own crops is extremely important and so is keeping your crops safe from any unwanted pest invasion to avoid defoliation and crop loss.

Naturally, you need to deal with the Colorado beetle problem as well.

What Plants Do They Invade?

Even though the Colorado potato beetle is more so known to invade potato plants and spread across America and various parts of Europe from 1859 onwards, they also attack and invade other plants that you might be growing in your garden.

Let’s take a look at some of the major plant types they invade.

They might also be found in plants like Ground cherry or pepper plants but they’re not as commonly seen in these plants as they’re in the plants that we listed above.

Before taking any pest control measure, you first need to identify if the pest that has attacked your crops is actually a Colorado potato beetle.

Here are some of the determining factors of a Colorado Beetle invasion in your garden.

As we talked about it before, the Colorado beetle is famous for the 5 brown stripes on its elytra, which is the hard forewings of the beetle covering the hind wings.

It is orange-yellow in color and can be easily identified on the basis of physical features.

Size of an Adult Colorado Beetle

The average adult Colorado beetle is about 6-11 millimeters long and 3 or so millimeter wide.

They’re relatively smaller in size as compared to some of the other potato beetles. Even with the small size, they’re still incredibly dangerous in large numbers.

The larva is hatched around 10-12 days after the eggs are laid. The larva looks bright red to salmon pink as it grows with time.

There are two rows of black dots on each side of the larva body. It is much better to deal with the beetles at this stage then let them grow and feed on the plants for nutrition.

When it comes to breeding rate, each female adult Colorado beetle is capable of laying 300 or more eggs in their lifetime of several weeks.

In one go, an adult can lay around 10-30 eggs in a cluster which is a lot if you think about the complete invasive span of the beetles in your home garden.

What Does a Colorado Potato Beetle Do To Your Plants?

Any pest can have severe adverse effects on a crop but when it comes to Colorado potato beetles, they’re much more harmful than others.

The Colorado potato beetles are responsible for eating and defoliating your potato and tomato plants by over 75% in the growing larva stage.

This could lead to crops undergoing growth problems and becoming inedible completely. This is one of the many reasons that you need to get rid of Colorado potato beetles.

And with our help, you’re going to easily be able to do so. It is extremely important to get rid of these beetles if you want your plants and crops to thrive and grow healthily.

How to Get Rid of Colorado Potato Beetle Infestation?

Colorado potato beetles are extremely resistant to artificial insecticides and pesticides, that is why organic methods of controlling pest invasion are the only viable option in your case.

We’re going to use organic methods of dealing with the little buggers and make sure our plants remain undeterred.

Instead of actually damaging the beetle itself, synthetic pesticides end up damaging the plant and leading to defoliation at an even quicker rate, making the whole process of infestation more problematic and worse for us.

We’ve listed some of the easiest methods that you can use, in order to deal with the beetle invasion of your plant garden. Make sure you follow all the instructions completely accurately.

Since we know that synthetic insecticides like cypermethrin and permethrin aren’t cut out for killing these insects, we need to go for a more organic approach towards dealing with Colorado potato beetle infestation.

You can use organic bacterial insecticides containing the bacterium Bacillus Thuringiensis which can easily kill the larva before it grows into a proper adult beetle, halting the reproduction cycle and stopping the plant defoliation.

By using such insecticides, you’re essentially making sure that your plants remain safe in the midst of an infestation and further infestations in the future can be avoided.

The most popular method of killing Colorado potato beetles is through the use of organic antifeedants which control their feeding and halts it in order to slowly stop them from feeding on the plants and ultimately die off.

The antifeedant pesticide that most farmers use and you can use too is Neem oil.

You can apply neem oil on the plants where you feel the infestation exists and in a short while, you’ll see that the larva and the adult beetles will no longer be able to feed off of your plants, causing them to starve and die, saving your plants from mass defoliation and loss of yield.

If the infestation hasn’t grown too much in number and you can still deal with the beetles, the old fashioned way, the best method to remove the Colorado beetles before they cause problems is by handpicking them off and putting them into soapy water to kill them off.

If you’re not for this kind of thing, you can actually buy a bug vacuum which is specialized for gardening use.

With the help of the bug vac, you can actually pick off any unwanted creatures and pests that you think are causing a lot of problems for your crops and plants.

There are many different carnivorous insects that are predators of the Colorado potato beetle.

If we talk about some of the major ones, here’s a look at them.

If through the use of heavy mulches and other methods, you can introduce these predators into the environment where you think the potato beetles might be residing, you won’t have to do any of the tough work.

In fact, most of the hard work of taking care of the plants and crops will be done by the predators themselves as they find and hunt the prey.

These predators can then be dealt with using synthetic pesticides because of lacking resistance in comparison to the Colorado potato beetle.

If the infestation is still in the beginning stages and you need a proper solution for the problem that stays working for a long time, introduce beetle repellant plants into the environment.

Make sure you grow plants like Sage and Catnip near your crops and other plants that you want to protect from the beetles.

Because these plants will repel the insects and keep them from attacking the crops.

Using any of these methods, you can actually deal with an ongoing infestation of Colorado potato beetles.

You’ll be able to easily remove the problems without having to risk the plant growth.

However, the best course of action would still be to prevent rather than try to eliminate them.

In order to make sure that the beetle doesn’t have an environment setting for an infestation, you need to take measures that keep the plants and garden safe and sound through different tricks and methods.

To give you an idea, we’ve created a list of tips and tricks you can use to avoid infestations in the first place rather than to remove them.

Well, the reason for using floating row covers for plants is that you’ll be able to give your plants access to air and sunlight which are essential for their growth.

But at the same time, the row covers stop Colorado beetles from making their way to the plants which reduces the defoliation by a huge margin, increasing plant growth and ensuring infestation prevention.

A mistake that many self-sufficient gardeners end up making is that even after infestations, they end up growing the same crops in the same place without thinking about the consequences.

What happens in this position is that since the Colorado potato beetles reside in 5-10 inches inside the mud during wintertime and only come out to lay eggs and feed on plants in the spring, the chances of an infestation happening again grow exponentially.

To deal with this problem and ensuring the protection of certain crops, you can choose to keep rotating the placement of growing your crops or plants every year so that the beetles do not get the chance to feed, reproduce and infest the plants that you’re growing.

By mulching the ground of the plants, you can actually avoid providing the beetles an environment to escape through the mud and causing an infestation.

These are the different kinds of mulches you can use.

Through mulching, you can ensure the safety of the plants by blocking out insects and also help the plant achieve better growth due to the excessive nutritional availability in the soil as the mulch is placed over it.

In fact, mulch can also be used to attract predators who can take care of the beetles in the early stages of development.

This is a particularly less used but really effective tip.

There are many different genera of plants that provide resistance to Colorado potato beetles in all kinds of environments.

For example, in the case of growing potatoes, Russet Burbank is one of the types that has been proved to be completely resistant to beetle attacks making them the ideal potato growing choice in a home garden.

Similarly, in the case of tomatoes, nightshade, and other plants, you can choose to grow the types that are more resistant to beetle attacks which are pretty common nowadays.

In order to ensure complete plant safety and protection against Colorado potato beetles and other types of pests, you can use our prevention and infestation removal techniques for a better and fuller yield.

As people who love growing potatoes and other vegetables at home for better taste and hygiene, making sure our crops and plants are out of pest infestation reach is actually really important.

We hope that you learned all the pest control methods for growing your plants in your garden and will be able to apply them when you need to.

If you’re looking for other gardening advice, you can check out other articles as well.